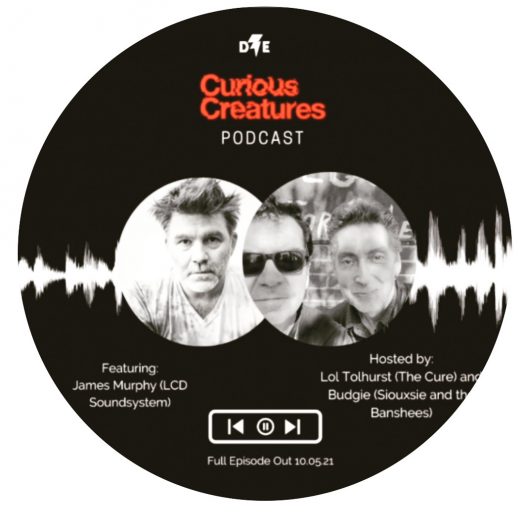 James Murphy (LCD Soundsystem) joins Lol and Budgie on this episode of Curious Creatures. Budgie and Lol discover that James knows all about the English Doom. They discuss the Power of newness. Limitations are good now, everyone thinks they’re cool. James says he loves Lol and Budgie (and they love him back). Later Lol and Budgie discover leather pants.

LCD Soundsystem: LCD Soundsystem is an American rock band from Brooklyn founded DFA Records co-founder James Murphy. The band’s debut single “Losing My Edge” was one of the most talked about indie singles of  2002, but the band has been on hiatus since releasing their live in-studio album ‘Electric Lady Sessions’ in February 2019. Fans of the band will know that the hiatus officially ended October 1 when the band announced a run of 20 shows in NYC.

Lollapalooza: Lollapalpalooza ( was started as a touring music festival in 1991 by Jane’s Addiction frontman Perry Farrell and remains one of the most popular music festivals in the US. The original festival was co-headlined by Siouxsie and the Banshees and Farrell’s Jane’s addiction. The Cure headlined in 2013 and 2020 (after Tolhurst’s departure from the band) and LCD Soundsystem performed in 2008, 2016 and 2018 in South America.

The Great Britain of the 1970’s – 1970’s Great Britain is widely recognized as the darkest time since the Second World War. It was a decade of strikes, unemployment, financial crisis, political unrest and terrorist attacks by the IRA (Irish Republican Army). The 70’s produced the age of Glam Rock and artists like David Bowie, T-Rex who directly influenced the “new wave” sound that was to follow. Towards the end of the decade a generation of disaffected youth launched the  Punk movement where bands likeThe Sex Pistols, The Clash and The Buzzcocks took all of their fury and frustration and channeled it into loud, fast and violent music. You’ll see the influences of one or both of these genres in the post-punk era that was created by bands like Joy Division, The Cure, Siouxsie and the Banshees and John Lyden’s post-Pistols band Public Image Limited.

Northern Soul– Northern soul is a music and dance movement that emerged in Northern England and the English Midlands in the late 1960s from the British mod scene, based on a particular style of American soul music coming out of Chicago and Detroit. The music style most associated with Northern Soul is the heavy, syncopated beat and fast tempo of mid-1960s Motown Records, which was usually combined with soulful vocals. The term “northern soul” emanated from the record shop Soul City in Covent Garden, London, and was first used in the owner’s weekly column in Blues & Soul magazine in 1970.

Wigan Casino: The Wigan Casino was a nightclub in Wigan, England that was open between 1973 and 1981. It became a venue for Northern soul/dance music and inspired many other clubs of the same type that hosted musical acts. In 1978, Billboard voted the Wigan Casino “The Best Disco in the World.”

Iggy Pop and The Stooges: The Stooges (aka Iggy and the Stooges), are an American rock band formed in Ann Arbor, Michigan in 1967 by singer Iggy Pop. Pop was heavily influenced by the music coming out of Detroit at the time, including the MC5, and by the psychedelic sounds of famed LA band The Doors. He developed a close personal relationship with David Bowie, beginning with the release of Raw Power in 1973, and began his solo career with their collaboration on 1977’s The Idiot and Lust for Life. Pop has collaborated with a variety of musicians from Slash to Underworld to French singer Clio, has a wildly successful career in Film and Television, been the subject of several rockumentaries and hosts a radio show/podcast on the BBC.

Roxy Music and Brian Eno: Roxy Music was a pioneering 1970s art-rock band who’s two best known members were Byian Ferry and Brian Eno, who left the band in 1973, starting a much storied feud with his fellow Bryan. Early Roxy Music bridged the gap between the emerging Glam Rock scene and the more established Prog Rock world and they became known for a string of hits including “Avalon” and “More than This” (which Bill Murray famously sings in the film Lost in Translation). Eno helped define and reinvent the sound of some of the most popular bands of the 1980s and ’90s including Devo, David Bowie, Talking Heads and U2. In his spare time he created the genre of ambient music.

T-Rex and Marc Bolan: T. Rex were an English rock band, formed in 1967 by singer-songwriter and guitarist Marc Bolan. The band was initially called Tyrannosaurus Rex, and released four albums under this name. In 1969, while developing the style for that fourth album, Bolan began to steer the band’s style towards electric rock, and shortened their name to T. Rex. This development culminated in 1970 with the song “Ride a White Swan”, and the group soon became pioneers of the glam rock movement. T-Rex went on to record four UK number one hits – “Hot Love”, “Get It On”, “Telegram Sam” and “Metal Guru” – and their UK chart topping album Electric Warrior (1971) is widely regarded as one of the most influential glam rock albums. Bolan passed away in 1977.

Lou Reed and The Velvet Underground: The Velvet Underground formed in New York City in 1964 by singer/guitarist Lou Reed and multi-instrumentalist John Cale. Cale went on to have a very successful career as an artist and as a producer, who worked on debut albums from The Stooges and Patti Smith. The Velvet Underground provocative subject matter and nihilistic outlook drew the attention of Andy Warhol his art collective “The Factory” and Warhol managed the band for a time and provided the cover art for their now acclaimed debut The Velvet Underground and Nico. They released three more albums White Light/White Heat (1968), The Velvet Underground (1969), and Loaded (1970) before they broke up in 1970. Reed went solo and released 20 solo albums. The most famous of which is his second record Transformer (1982), produced by David Bowie, which featured the single “Walk on the Wild Side”.  Reed died in 2013.