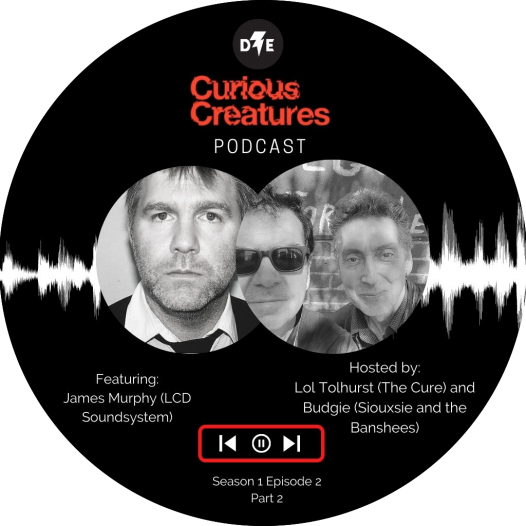 EPISODE 2: James Murphy: The Weird Kid in my Town

James Murphy (LCD Soundsystem) is back to chat with Lol and Budgie for the second time. Lol and Budgie discover that James really digs crazy music. They talk about the Road to Damascus leading to the Fountain of Eternal Youth, along with creating and why mistakes matter! Later Lol and Budgie discover drumming on chunks of metal, a love of staircases, and composing on steering wheels waiting for the lights to change.

B-Sides: A sides and B sides are the two sides of cassettes and records. The A side is typically the recording with the artist and producers that the record company or label intends to primarily market while the B side is a secondary recording that typically receives less attention.

The Humming Wires: Was originally an extra B-side to the 1984 single “Swimming Horses”. It was later released as part of Downside Up, a four-disc box set collecting B-sides and bonus material from the catalogue of Siouxsie and the Banshees.

Carnage Visors: Carnage Visors was a short film by Ric Gallup, Simon’s brother, that was played in lieu of an opener at Cure concerts when the band toured on the Faith album.

John Fox Studios Shoreditch: Garden Studios, which originally opened in 1978 by John Foxx of Ultravox fame, was a recording studio in Shoreditch. The Garden quickly became a cult favorite for bands like Siouxsie & The Banshees, The Cure and Depeche Mode and more contemporary artists like Arctic Monkeys.The Garden closed for business in 2012.

“Session Killers”: – Session musicians are artists who temporarily work with bands during recording or touring. In this episode James, Lol & Budgie discuss the vital importance of band chemistry vs. having the best musicians and agree that music from bands built from technical prowess alone resonated less emotionally.

PiL: Public Image Ltd (PiL) was formed by John Lydon (fka Johnny Rotton) in 1978 after the implosion of the Sex Pistols. Lydon was looking for a more experimental project and formed PiL. Their debut album, First Issue, is a bass heavy record that incorporated sounds from dub, noise, prog rock and disco. Although Lydon continued to push their sound further into avant-guard territory, their second album, Metal Box, is often regarded as one of the most important of the post-punk era.

Autotune: an audio processing method first introduced in 1997 by Antares Audio Technologies. Originally intended to correct off-key inaccuracies in vocal post-production, but has now also come to be used as a stylistic element, with variations of autotune in the vocoder and talk box audio effects. Cher popularized the technique in the 1990s.

Evil Geniuses: Evil Geniuses: The Unmaking of America: A Recent History is a nonfiction book by Kurt Andersen, published in August 2020. The book Evil Geniuses examines the rise and demise of the middle class while explaining how America decided that big business was king and abandoned the people for a now entrenched system where only the rich get richer.

B-52s: The B-52s is an American new wave band formed in Athens, Georgia, in 1976. The band was known for their colorful, retro look and throwback sound and had major alternative radio hits with tracks like “Love Shack” “Rock Lobster” and “Roam”.

The Clash: The Clash were a London band fronted by anti-hero Joe Strummer after seeing the Sex Pistols. The Clash went on to become among the most important bands in music and are often billed as “The Only Band That Matters”. They combined a variety of genres, including reggae, dub, funk, ska, and rockabilly, to create their unique protest rock sound. The first live Clash performance was an opening gig for the Sex Pistols and almost every musician since has sited Strummer or the Clash as one of their major influences, including Lol.

Bad Brains: Bad Brains are an American punk band formed in Washington, D.C. in 1977. They are widely regarded as pioneers of the hardcore punk movement, and like the Clash, combined elements of reggae, funk, heavy metal, hip hop, and soul in their music. Bad Brains have released nine studio albums. Their classic lineup includes singer H.R., guitarist Dr. Know, bassist Darryl Jenifer, and drummer Earl Hudson. This lineup was intact until 1987 and has reunited periodically in the years since.

Captain Ahab/Moby Dick – Captain Ahab is a character in Herman Melville’s Moby Dick. He obsesses over seeking revenge on the ‘white whale’ (Moby Dick) that caused him to lose his leg. Ahab is driven to the point of madness on his journey of revenge against Moby Dick and he is eventually entangled in the line of his own harpoon and dragged to the depths by the whale he swore revenge against. The themes widely discussed from the novel include fate and free will, the struggle between nature and man, and how obsession results in destruction.

Rototoms: A Rototom is a type of drum that was developed by Al Payson, Robert Grass, and michael Colgrass. The drum has no shell and is tuned by rotating. It has a variable pitch unlike other drums.

Ginger Baker: Peter Edward “Ginger” Baker was an English drummer, notorious curmudgeon and co-founder of rock band Cream. During the 1960s and 1970s, he is widely believed to be “rock music’s first superstar drummer”. His style melded jazz and African rhythms. Pioneered jazz fusion and world music. Baker died in 2019.

John Bradbury & The Specials: The Specials were a ska-punk band who were a dancehall meets punk band known for their mod-style and 1960s period rude boy outfits. The band’s eponymous debut record was produced by Elvis Costello and they went on to have numerous hit singles including “A Message to you Rudy” and “Ghost Town”. Bradbury was central to their dance hall sound and his “attack style” drumming became instantly recognizable.

Jet Blac & The Stranglers: English drummer, founding member of the punk rock band “The Strangler.” The legendary drummer, a hero to both Lol & Budgie, was an energetic dummer known for his brilliant off kilter, powerful and oddly jazzed tinged drumming.

Terry Chimes & Topper (The Clash): Another much admired pair of drummers are Terry Chimes the original drummer for The Clash and Nicholas Bowden “Topper” Headon who joined the band in 1977. As a drummer, Headon often employed a distinctive style which emphasised a simple bass-snare up-down beat, accentuated with closed hi-hat flourishes.

Terry Chambers & XTC: Terry Chambers is an English drummer who was a member of the band XTC from 1972 to 1982. Chambers originally wanted to learn to play the piano, but his parents could not afford to buy one. So instead he saved money from his Saturday job, stacking shelves at the local grocers, and at the age of 14 bought his first drum kit.

John Maher & The Buzzcocks: John Maher was an integral part of the punk and new wave scenes emerging in Manchester. He joined the Buzzcocks in 1976 at 16 and remained with the band until 1992. Maher’s rapid-fire drumming set a blistering pace and the Buzzcocks remain one of the most influential bands behind the Manchester sound.