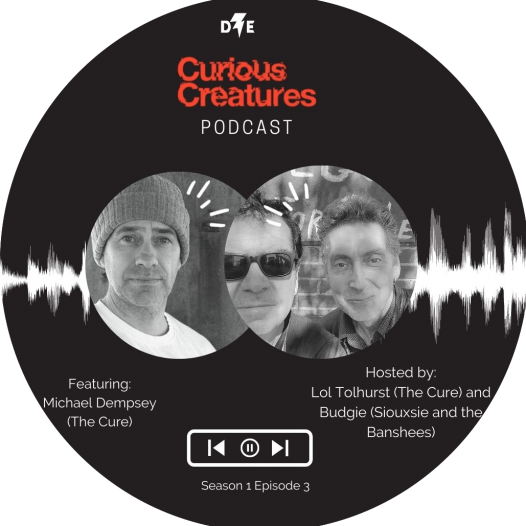 Lol and Budgie are joined by Michael Dempsey, the third founding member of The Cure. Lol and Budgie discover that Michael really dug Lol’s hairdo. They find out they were both misfits of no fixed abode in a progressive “In-a-Gadda da-Vida” where “Electric Warriors” congregated against the miasma of Apathy. Michael notes that not being able to play is a singular benefit. They had chips and beer, and watched the Banshees from the wings which is where they learned their stagecraft. Budgie talks about his love for the Cure’s Strange screens on stage during Carnage Visors and Faith (meet the Pink Floyd of the new wave).

Hansa Records: Was a German record label that signed Easy Cure in 1977. Easy Cure, then a four-piece with Michael Dempsey, Robert Smith, Porl (aka Pearl) Thompson, and Lol Tolhurst, recorded their first studio demo sessions for Hansa at SAV Studios in London between October and November 1977. None were ever released.

Ric Gallup and Carnage Visors: Carnage Visors was a short film by Ric Gallup, Simon’s brother, that was played in lieu of an opener at Cure concerts when the band toured on the Faith album. Ric was also the first patron of the band, giving them £50 to record a demo and Simon later became (and remains) the Cure’s bass player.

Chris Parry & Fiction Records: The demo eventually found its way to Polydor Records scout Chris Parry, who signed the Cure to his newly-formed Fiction label—distributed by Polydor—in September 1978. Parry managed the band until 1988 and Fiction released all of their music until 2001 when Parry sold the label to Universal

T-Rex and Marc Bolan: T. Rex were an English rock band, formed in 1967 by singer-songwriter and guitarist Marc Bolan. The band was initially called Tyrannosaurus Rex, and released four albums under this name. In 1969, while developing the style for that fourth album, Bolan began to steer the band’s style towards electric rock, and shortened their name to T. Rex. This development culminated in 1970 with the song “Ride a White Swan”, and the group soon became pioneers of the glam rock movement. T-Rex went on to record four UK number one hits – “Hot Love”, “Get It On”, “Telegram Sam” and “Metal Guru” – and their UK chart topping album Electric Warrior (1971) is widely regarded as one of the most influential glam rock albums. Bolan passed away in 1977.

“In-A-Gadda-Da-Vida”: is a song recorded by Iron Butterfly and written by band member Doug Ingle, released on their 1968 album In-A-Gadda-Da-Vida. Ingle was so drunk when he was first playing the song for his band mates that they misunderstood the actual title of the song was “In the Garden of Eden”. A 17 minute love song from the biblical Adam to his mate Eve.

Pink Floyd: An English rock band formed in London in 1964. Gaining an early following as one of the first British psychedelic groups, they were distinguished for their extended compositions, sonic experimentation, philosophical lyrics and elaborate live shows. They became a leading band of the progressive rock genre, and calling the Cure “the Pink Floyd of the New Wave” was not a compliment.