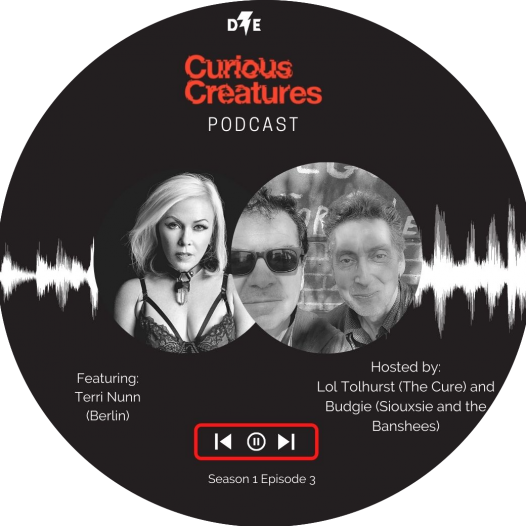 Terri Nunn (Berlin) joins Lol and Budgie this week on Curious Creatures. Lol and Budgie discover that the journey is half the battle. The three discuss whether or not musicians have social issues, and if music is the bridge (apparently it’s good for your heart). Lol, Budgie and Terri wonder if the magic of music lasts forever. Do kids listen to and draw their own inspiration from their parents’ music now? Terri talks about having the opportunity to go back and reassure her younger self that it’s all going to be ok. Later on Lol and Budgie get into drum machines and decide they are ok – AND they’re not afraid of them!

Grace Slick & Jefferson Airplane: Slick was a key figure in the early psychedelic scene that developed out of San Francisco in the 1960s. She is best known for her powerful voice and work with Jefferson Airplane who had two top-ten Billboard hits, “White Rabbit” and “Somebody to Love” off of their beloved 1967 album Surrealistic Pillow.

The Beatles: Formed in Liverpool in 1960, John (Lennon), Paul (McCartney), George (Harrison) and Ringo (Starr) led the British Invasion and are widely accepted as the most influential band of all time. They were responsible for earning recognition for popular music as an art form and revolutionized the music industry.

Pink Floyd: An English rock band formed in London in 1964. Gaining an early following as one of the first British psychedelic groups, they were distinguished for their extended compositions, sonic experimentation, philosophical lyrics and elaborate live shows. They became a leading band of the progressive rock genre.

Glam Rock: A style of rock music that developed in the United Kingdom in the early 1970s with musicians who wore outrageous costumes, makeup, and hairstyles, particularly platform shoes and glitter. Some popular Glam Rock artists include David Bowie, Roxy Music, Freddy Mercury and the New York Dolls.

Goth Rock: Goth Rock emerged from the post-punk scene in the United Kingdom in the late 1970s. The first post-punk bands which shifted towards darker music with gothic overtones and costuming. Some bands in this genre include Siouxsie and the Banshees, Joy Division, Bauhaus, and the Cure.

Dallas: Dallas was a prime time soap opera that aired for 14 seasons in the US from 1978-1991. The show is know. for the most popular and shocking cliffhanger of all time, the shooting of the breakout lead villain JR Ewing. Terri Nunn was offered a role on the show which she turned down to pursue her music career.

TR808: The Roland TR-808, commonly known as the 808, was the early machine manufactured by the Roland Corporation between 1980 and 1983. It was one of the first drum machines to allow users to program rhythms instead of using preset patterns.