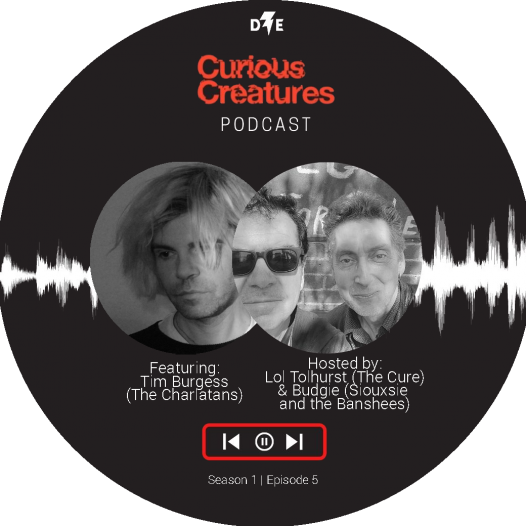 Budgie and Lol hear about Tim’s first memory of Little Jimmy Osmond at six years old and then Buzzcocks in 1978 at ten years old. He got let in the back door of clubs went on stage in the late 80’s doing his thing and nobody has told him to get off yet. The sun came out in Manchester and everyone started dancing! Tim ended up In Los Angeles as part of his childhood fantasy. We discuss destruction-touring and making records. On Head on the Door Lol nearly set the studio alight with model racing cars. Out of chaos Budgie makes Dear Prudence. Tim lived as the Rolling Stones making Exile on Main Street. Tim gets a editor and writes a great memoir and carried on writing. Tim gets Budgie to agree to let him use his tweets to help people affected by Covid. We tell Tim he’s saved music. Good man. Later on they reveal that punk produced quite a few characters as it was such a time of social change. That’s why we remember them. And if Budgie doesn’t know them Lol does!

MENTIONED IN THIS EPISODE

Modern psychedelic: A wide range of popular music styles and genres influenced by 1960s psychedelia, a subculture of people who used psychedelic drugs such as LSD, psilocybin and marijuana to experience visual and auditory hallucinations, synesthesia and altered states of consciousness.

Love Bites, The Buzzcocks: The second record released by the Buzzcocks in 1978. Trouser Press wrote that the record “demonstrates both the Buzzcocks’ perfection of their particular brand of pop and their disillusionment with its restrictions. This record was especially pivotal in the musical development of young Tim.

The Hacienda: The Hacienda was a popular nightclub in Manchester that opened in 1982. The club was largely financed by Factory Records and New Order and became a showcase for factory records bands and home to the “Madchester” scene. The Smiths played there three times in 1983 and Madonna had her first U.K. show there in 1984. The Hacienda was instrumental in the careers of bands like Happy Mondays, Oasis, The Stone Roses, 808 State, Chemical Brothers and The Charlatans. The Hacienda lost closed in 1997.

New Order: After the death of Joy Division singer Ian Curtis the remaining members of the band formed New Order. New Order’s integration of post-punk with electronic and dance music made them one of the most acclaimed and influential bands of the 1980s. They were the flagship band for Manchester-based independent record label Factory Records and its nightclub The Haçienda.

Pornography: The fourth studio record released by The Cure on Factory Records in 1982. Along with Seventeen Seconds and Faith the three albums cemented the Cure’s reputation as the ultimate purveyors of goth rock and made them one of the first alternative bands to have chart and commercial success in an era before alternative rock had broken into the mainstream.

Johnny Buttons: The name of the old man who appears on the cover of the Standing on the Beach (titled Staring at the Sea in some countries and formats), a singles collection released by The Cure in 1986. Buttons was a local fisherman.

Knickers: the British word for underwear.

The Glove: A 1983 side project between Robert Smith (The Cure) and Steve Severin (Siouxsie and the Banshees). The project emerged as both artists were experiencing heavy stress related to their primary projects. Smith was also a member of the Banshees at this time. The duo released one studio album, Blue Sunshine, before Smith left the project to go back to The Cure.

Angel Recording Studios Limited: – Angel Studios was a British recording studio in Islington, London. The building itself originally opened as a chapel in 1888. In 1979, and the building was purchased by De Wolfe Music. A major refurbishment and conversion project was undertaken, and recording began in 1982. Siouxsie and the Banshees, followed by The Cure, were the first to record at the studio the following year. The studio closed in autumn of 2019.

Telling Stories: Telling Stories by Tim Burgess of The Charlatans is one of the decade’s most revealing rock books. The Charlatans. Madchester. Britpop. Taking on the world. Here are the highs, the lows, the joys, the agonies, and the stories of what it’s like to be in a rock band, as told by front man and survivor, Tim Burgess. For readers who enjoyed Life by Keith Richards and Bit of a Blur by Alex James, Telling Stories is one of the finest music books of recent times. It’s a story of achievement and survival, from London to LA. (link to purchase below)

Tim Book Two: Vinyl Adventures from Istanbul to San Francisco: Tim Book Two is the follow-up to Telling Stories, the hugely successful memoir of Tim Burgess, singer of the Charlatans. It tells of his lifelong passion for vinyl and the shops that sell them. Tim asked a stellar cast of friends — from Iggy Pop to Cosey Fanni Tutti to Paul Weller — for recommendations, which he’s tracked down in breaks from touring across the world. What emerges is a funny, affectionate quest, and a moving account of a life in records. (link to purchase below)

The Listening Party: Artists, Bands and Fans Reflect on 100 Favorite Albums: In 2020 when the world was forced to hit pause on live in-person gigs, Tim Burgess found an ingenious way to bring people together by inviting artists and bands to host real-time album playbacks via Twitter. Relive 100 of the most memorable listening parties here with stories from bands and fans, rarely seen backstage images, and unique insider info from those who created these iconic albums. (link to purchase below)

Cured: The Tale of Two Imaginary Boys: As two of the first punks in a provincial English town, Lol Tolhurst and Robert Smith didn’t have it easy. Outsiders from the start, theirs was a friendship based initially on proximity and a shared love of music. They began playing together in pubs and soon developed their own unique style and approach to songwriting, resulting in timeless songs that sparked a deep sense of identification and empathy in listeners and spawning a new subculture dubbed “Goth” by the press. But there was also a dark side to The Cure’s intense and bewildering success. Tolhurst was nursing a growing alcoholism that would destroy his place in The Cure and nearly end his life. (Click here to order an autographed copy of Cured: The Tale of Two Imaginary Boys)

Skip: British word for a dumpster