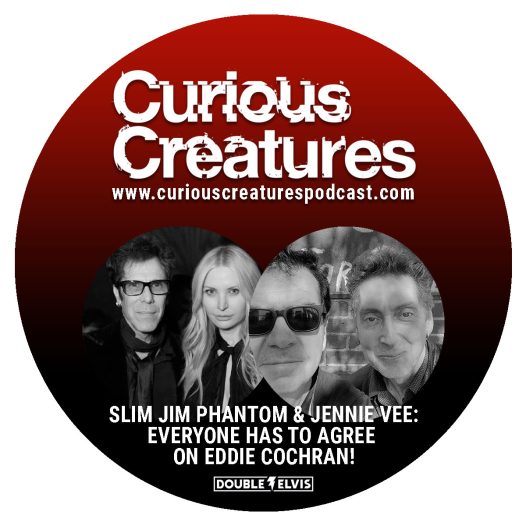 EPISODE 9: Slim Jim Phantom & Jennie Vee: Everyone Has To Agree On Eddie Cochran!

1981 The Stones turn up to see The Stray Cats in London!

Lol sees The Cats strut their stuff at the Marquee.

They’re the greatest band in the world but, they have No name!

This is how they started

New Hair Cuts! Got all the Gear! Hello Blue Cats!

Any new haircut was cool.

Lot of cross-over in punk-era London.

Stray Cats – the most British, US new wave band on MTV.

They thought Terry Thomas and Ringo Starr would greet them at the airport in London.

Floors we have slept on! An 18-yr old Jennie Vee, made pilgrimage to London, took up bass and guitar and convinced John Peel she had a band.

The truth :There’s no band without a sick drummer!

Budgie did his 10,000 hours at Eric’s Club Liverpool. Budgie’s secret? he sings all his beats and sang himself to sleep to the Beatles. We All love Ringo getting inside the song and the pure joy of drumming. Drumming as a bloodsport!

Lol and Tony Kanal share a moment at The Greek with all Jim’s pals! Jennie Vee says, the greatest feeling is just to rock . Don’t do no crazy riff, just the joy of the moment is all.

The county clerk married Jennie and Jim on Zoom. We plan The big wedding party all star gig!

Lol was married in Vegas. Dick Smothers was next in the line. Budgie got married in Hong Kong.

Ronnie lane bumped into the Cats .Gave them the space in his house to be the band they became .. A hybrid of Punk & New Rockabilly. An emotional moment for Budgie . Still singing the songs. All roads lead to Eddie Cochran!