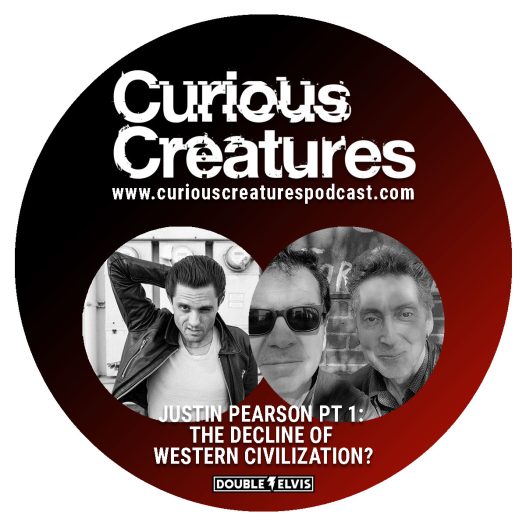 In this Episode Lol and Budgie talk to Justin Pearson (The Locust, Dead Cross), with whom we discuss more about: The Decline of Western Civilization?

He’s a reasonable Fatalist, not an Apathetic Nihilist
He’s a Dead Cross massive influence for The Locust,
He’s a Wild scene Iguana, No Tequila in Tijuana!
He just picked up the monitor and tore off his thumb

4 pm is an angry time for NIN to be on stage
The Opposite of Love Is Apathy, Not Nihilism or Rage
When Lol saw the same back in 76 and 77
He went down to his local pub to meet people already in Heaven.
Love on one hand and Hate on the other, Apathy doesn’t fit
Punk to Drunk, Humanity can’t govern, What else to do with it?
The Decline of Western civilization, Bill Grundy, and the Bromley Contingent
Second World War imagery, Notting Hill Gate carnival, Reaction for Attention.

Weird Energy, No guitar solos, Wire 12XU delivery!
Goth and double kicks, Robotic drumming and Gypsy Eyes thievery!
Succinct at 17, Eye-catching at 18, Noticed at 19, Twisted at 20.
Self-imposed boundaries, strange beats and Tones
We made sound into pop songs, We embraced our limitations

What were your influences?
Skateboarding culture and Siouxsie Sioux, as a pioneer of gender equality for Justin.
Lol had Sylvia Plath to inform his thinking as a young man discovering how to play.
Female singers, and female musicians helped Budgie’s evolution.

How does it make you feel?
Boys Don’t Cry was a strange thing for Justin as a child.
Important to deal with toxic masculinity.

Be ahead of yourself, say what’s wrong, do what’s right,
Female musicians still have to fight.
We remain Grateful for what happened on the planet
Just after Sergeant Pepper taught the band to play…