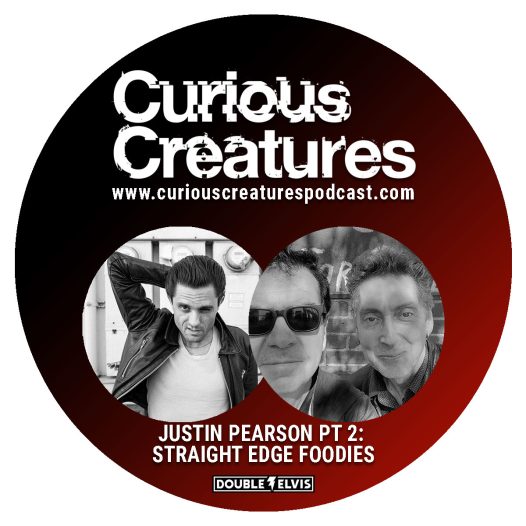 In this Episode Lol and Budgie continue their talk with Justin Pearson, with whom they discuss more about Straight Edge Foodies

Landscape redefined by skateboarder Mason,
Silva planned routines to Budgies drums
It’s the space outside of the sound we’re chasin’
Cinematic for the Banshees and their chums

The Creatures flew to Hawaii, to record their debut,
the jungle fed the music, and the conch shell blew.
Victor Boullet played Metallica to get The Creatures mad,
Ross Robinson and Simon came close to something very bad!

“No Hi-hat!” ordered Siouxsie, “No Hairspray in my mix!”
Budgie moved the hi-hat out but played with magic sticks,
Creating things from nothing was our drumming bird’s propensity,
His Drumming in the Dreamhouse throbbed with LSD intensity

Justin and DMT experiment, Lol and Budgie too,
Budgie, Lol and Justin want healthy things to chew.
Post-abuse bodies may have survived, but some Brain tissue did not
Justin’s Pre-show ritual is a strong expresso shot!

On Reflections, Simon said to Lol, “Lol you’re very Zen.”
Lol reflected soberly, “How weird it is to ken.”
Proficiency is priority, you have to love yourself,
The secret door out of the maze – is the one that’s marked ‘Good Health!’

Q: Was this the longest recording for Curious Creatures?
A: You bet your sweet bippy it was!

The pause is cool and beautiful and weird.
And we may have a dinner date in San Diego!

Curious Creatures is a partner of the Double Elvis podcast network. For more of the best music storytelling follow @DoubleElvis on Instagram or search Double Elvis in your podcast app.