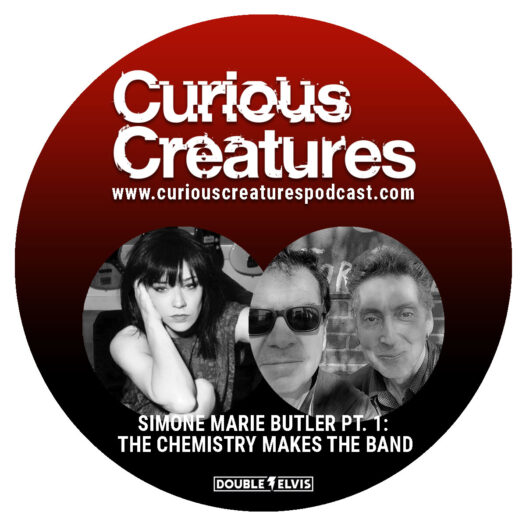 In this Episode Lol and Budgie talk to Simone Marie Butler, our beatific angel of bass, with whom we discuss – The Chemistry Makes The Band.

The Sand.
Out there, post-lockdown Screamadelica tour
Tokyo, Japan and everywhere more
Traditional politeness for the visiting Brits
First gigs post-pandemic, please play all the hits!

Lol liked the silence and the gifts from Japan
But he drank all the bath salts, which wasn’t the plan
Simone received sweetness to comb through her hair
Budgie got Pocari Sweat at the Manga Street fair

Cherry blossom season caused a big sake thirst,
Who threw the phone through the window first?
Robert and Siouxsie were almost deported
No return for ten years – though ‘twas never reported.

The Oyster.
Budgie and Simone at the breakfast bar
calling Lol from Europe – to say, “Hello La!”
On the bus with the crew, what’s the golden rule?
Traveller’s ‘Toilette’, does not accept ‘Le Stool!’

Simone auditioned for Primal Scream
She learnt all the songs and realised a dream
No more living on chips and travelin’ in a van
Bobby treats the band well, he’s a Gentleman

Siouxsie’s manager Nils asked Budgie to audition
Ex-Slits Budgie did a good Palmolive impression.
Success celebrated with a ‘Roll-up’ and a beer,
Lol and Simone had young Ant, Adam’s ear!

The Pearl.
Simone in a film about the homeless that sears.
Their lonely lives lightened by the unconditional love,
of a dog they can talk to when no-one else hears
It’s a story that moves with a powerful shove.

Scary ghost stories and thunder and lightning,
A bus shows Budgie that his mother’s around.
Simone’s grandpa’s goodbye is a story quite frightening,
Lol says Budgie knows things about Lol that astound!

For Lol the first 4 Cure albums are significantly spiritual
Though that’s not to say others misunderstood
It’s the sand in the oyster that makes the pearl beautiful
It’s not Hunky Dory – but the friction is good!

Simone is also a Dj, playing clubs and festivals through the UK and Europe such as Benicassim, Glastonbury, Convenanza, Manchester psych fest, Freight Island, YES, Spiritland, Alfresco and many more … Simone’s taste is very much in electronic music , delving into deep house, techno and electronica while embracing the echos of Weatherall’s love of eclecticism and Dub., yet also being varied enough to have a residency at London’s Ronnie Scott’s.
She also has her own weekly radio show on Soho Radio which is heavy on new music, remixes and other rare gems. Simone hosts her own club night which is a spin off from the radio show, bi monthly in north London at The Night Owl.

Simone has also made a documentary called ‘year of the dog’ highlighting the work of the London based charity Dots London who care for dogs and their owners who are sleeping rough on the streets.

She is a strong supporter of Women’s Aid Charity and Refuge as well as Women’s Trust in the flight against domestic abuse.