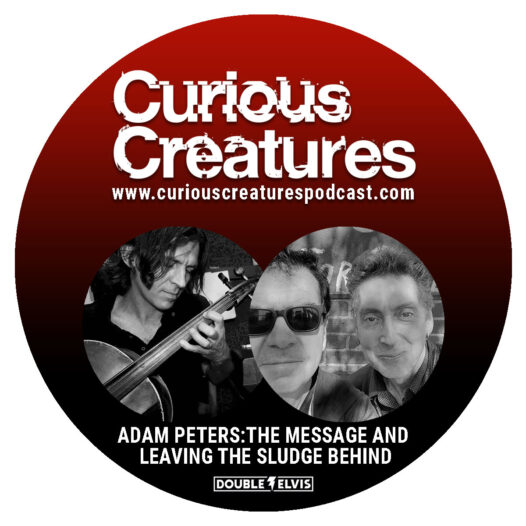 EPISODE 47: ADAM PETERS:THE MESSAGE, AND LEAVING THE SLUDGE BEHIND

In this Episode Lol and Budgie talk to musician and film/television composer Adam Peters, with whom we discuss: The Message, and Leaving the Sludge Behind

Hope: from the New York gutter, climbing out of a skip
a pile of Banshees outside a film star’s bar
a scene out of a movie or was it all a pre-ordained?
We never considered where we were heading
Just grasping for distant horizons

Commitment: The Flowerpot men began like early ‘Industrial’
When punk’s magnetic pulled played mayhem with Adam’s Classical training,
A gang of Bunnymen pulled Adam out of music school
to tour in America after a day drinking and jamming Tom Verlaine’s TV

Health: beginning to think when it starts to go wrong, and The Sludge drags you down.
Music was changing and just like the dinosaurs some big ones got left behind
Pressure was growing to achieve perfection and Adam left for New York City
The Gramercy Park Hotel that we knew and loved, Lloyd Cole saves Adam and keeps his Par.
Then Adam met Oliver in a bar – with Michail Gorbatschow and Val Kilmer on hold
Life began to change…

Discovery: Buffalo Bill’s place on native American sacred ground
The mountain where the animal’s winter, turned Adam’s life around
Time had stood still in NYC – so he loaded up the truck and he moved to Joshua Tree.
A Death Valley angel saves Lol from his troubles
Budgie hits his Nadir – Lost in France.

The Prologue: beingPart of a Team is Key
Learn when to walk away – Hans Zimmer knows how
It’s that Feeling on the back of The Neck
When it’s True – The Message Travels,
Back to The Future Blues!

ABOUT ADAM:
A unique vision and voice has set him apart in his artistic approach to writing music for picture. His ability to combine a classical music education with free thinking modern electronic techniques helps each score finds its own way to tell a story.

His original score for Icarus helped propel the movie to an Oscar win in 2018 for Best Documentary Feature. Previous scores for Oliver Stone movies Snowden and Savages were widely acclaimed. His latest project Biggie; I Got A Story To Tell is currently in Netflix’s top movie whilst the score for controversial movie The Dissident has helped push the brutal Khashoggi murder story to the public eye in an emotional and resonant way.

Adam works with a wide range of modern directors and creatives. His style successfully crosses genres and transcends convention. His work continues to range from smart independent films to high grossing movies.

Following a successful career in bands in the UK , Adam made a full-time move to the United States. The Hollywood creative community embraced Adam’s unique sensibility and flair at writing music to picture. His early orchestral writing set the tone on scores for Paddington, Crazy Stupid Love, I Love You, Phillip Morris and Ruby Sparks. These movies showcased Adam’s unique spectrum of abilities from left-field electronics to full orchestral writing. Oliver Stone heard his music and initiated a partnership that has spanned several years and projects including feature films Savages and Snowden, documentaries South Of The Border and Mi Amigo Hugo and a 10-part TV series The Untold History Of The United States. Word of his talent lead to numerous collaborations, notably with Hans Zimmer on scores for Spider Man, Rango and The Lone Ranger. His recent modernist and emotional scores for the Iraq War films Sand Castle and The Yellow Birds received notable praise for their original voice.

Adam first achieved success in the 80’s as keyboard player, cellist and string arranger with the band Echo And The Bunnymen. Their song “The Killing Moon” is now recognised as a British classic and has been featured in over 20 films. His film music is known for its wide variety of sound and emotion, combining orchestral writing with analogue electronics and electric cello.

While in London, Adam continued to work/play with groundbreaking artists such as Beth Orton, Siouxsie And The Banshees, Athlete, Mercury Rev, Fischerspooner, The Dream Academy, Lloyd Cole, The Triffids, Neulander, Transvision Vamp, The Flowerpot Men, Family Of God, Alison Moyet and Billy Bragg.

Adam was classically trained at the prestigious Guildhall School of Music in London. He has composed and recorded worldwide in London, Paris, New York and Los Angeles. 2019 saw the 30th anniversary of “Beat City,” one of the first songs Adam wrote as a teenager, featured in the classic John Hughes movie Ferris Bueller’s Day Off.

During the pandemic Adam has spent his time scoring wide ranging documentaries. The Dissident, Biggie Smalls, The Pope and the French artist JR.