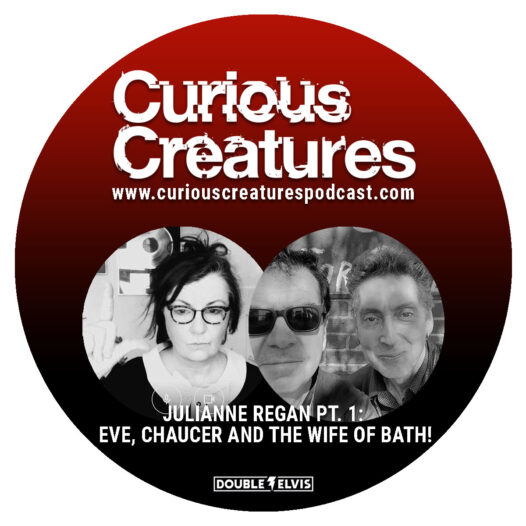 In this Episode Lol and Budgie talk with Julianne Regan All About – Eve, Chaucer and the Wife of Bath.

Running Up That Hill, (we made a deal with God to reach this age!)
Faust and Amon Düül Rule!!
Julianne was Shy and chose The Bass
Gene Loves Jezebel loved Julianne and her bass
Julianne loved The Beatles harmonies
Neil Young and David Cassidy and Prog Rock
But Kate Bush was her Icon

The Miller’s tale and The Saucy Wife of Bath
Steeleye Span’s Now We Are 6
Ian Anderson’s Old Coat, one leg, and a Flute
Jethro Tull, was THE loudest band Julianne had ever heard.
We, hiding the Genesis ‘Lamb’ and ‘Selling England’ when punk happened!
Charlie Watts was Lol’s bestest neighbour in Devon

Julianne listened to some obscure bands like,
The Cure, Siouxsie and The Banshees and Cocteau Twins
And also, ‘And Also The Trees’ (now we know who they are 🙂)
We all loved John McGeoch’s virtuoso brilliance – we still do.
Rum Runner and Barbarella’s Clubs Birmingham, England
The ‘Windrush generation and a boiling point of Thatcher’s rule.
Terry Hall and growing up in Violent times.